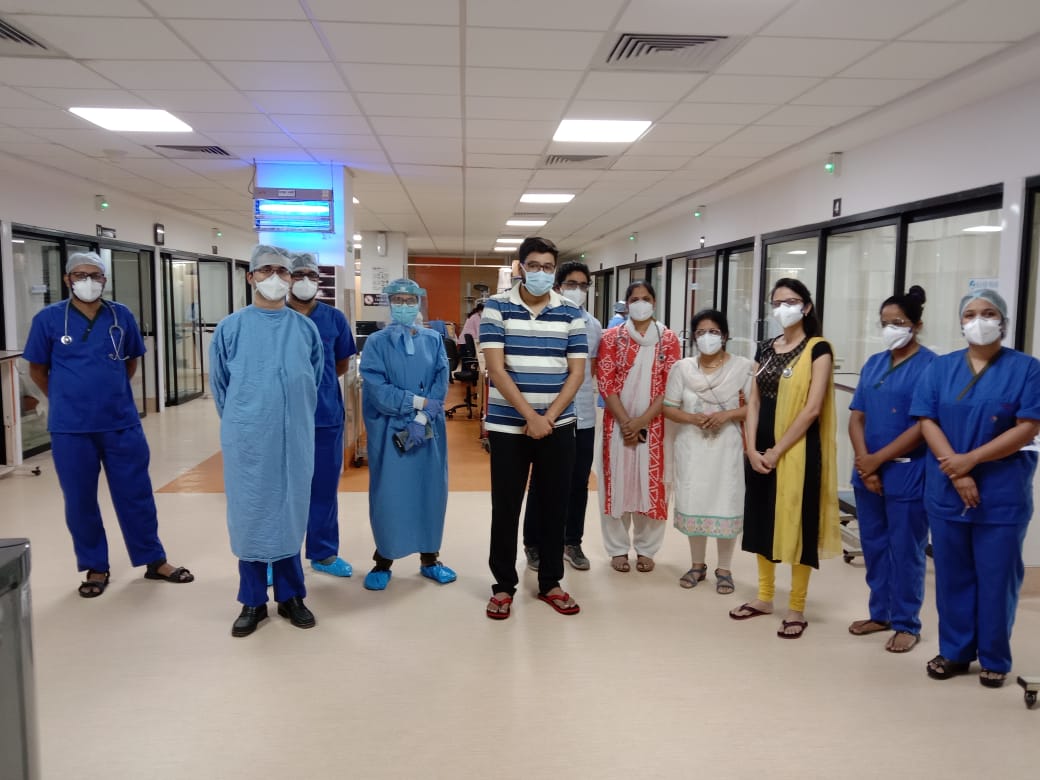 “Service to others is service done to God”.

The inspiring story of Dr. Nilesh Misal, a COVID-19 survivor from Beed will definitely make one emote with joy and sorrow alike. He has a service-oriented mind since his childhood. Coming from a village, this young man with full of dreams – on the suggestions given by his father and grandfather worked passionately to take up a career in the medical field. After getting super quality treatment at Ruby Hall Clinic Pune – today he says “I dream of becoming a renowed intensivist like Dr. Prachee Sathe Ma’am and I want to open a big Intensive Care Unit (ICU) in Beed to tend to my people and take care of critically ill patients of my village.” He was motivated by the realization that there was dearth of medical facilities and ICU in Beed. An ardent follower of Mahatma Gandhi, Dr. Nilesh Misal cherished the need to focus on development of villages and thus, took up specialization in Internal Medicine – the mother of all specialities – to take care of his people in his village. He was shifted to Ruby Hall ICU Pune after he developed further complications due to COVID-19. He was very much moved by the care that he received here and he got so inspired that he wants to follow the same standards followed in Ruby Hall ICU in his village as well.

After Dr. Nilesh’s tryst with COVID-19, he rose like a Phoenix and in this rebirth; he emerged fearless and optimistic to fulfill the purpose of his life. Even amidst adverse situations wherein his family, friends and colleagues were cynical about his overt selflessness in dispelling duties to others, he was not affected. His determination to open an ICU back home was fired up more by the class treatment he received at Ruby Hall ICU. He was very elated with the efficiency of treatment and intensive care that he received at the hands of Dr. Prachee Sathe, the director of Critical Care Medicine at Ruby Hall Clinic.
Dr. Nilesh Misal contracted COVID from one of his patients while intubating them. He did not discriminate between his patients or have had second thoughts about his safety while tending to COVID suspected patients. He happened to contract COVID from a suspected patient who had arrived in casualty with problem of breathlessness and later on this patient tested COVID positive. This patient came to casualty but was then shifted to the ICU where Misal was on duty. After checking on his condition, Dr. Nilesh decide to intubate the patient. Five days after Dr. Nilesh had intubated this patient, he started showing symptoms of COVID. Dr. Nilesh was wearing a PPE kit and N95 mask but did not use a face shield during intubation procedure. When the patient recovered, he was disturbed to know that Dr. Nilesh was reeling under COVID and had to be shifted out to Pune for treatment. Dr. Nilesh was hopeful that God would not forsake him as he had saved the life of this COVID patient and many others and this hope kept him going.

Dr. Nilesh’s recovery took longer than usual but eventually he made it through and this strengthened him to understand what COVID-19 patients go through. It instilled faith in him that he will be able to tend to them in a better way as he went through the pain and healing process himself. During his treatment in Ruby Hall, he would just think about how he can help others and this attitude helped him to recover. He did not foster any sort of negative thoughts about the future and that is when he realized that battling COVID is both a medical as well as a psychological battle. Throughout this battle, Dr. Prachee was a constant source of motivation for him.
Initially Dr. Nilesh was a bit anxious and fearful when he was told that he was to be shifted to Pune. He had many questions in mind and the thought crossed his mind that his case was getting further complicated. However, he made up his mind and he was determined to stay optimistic. His family was worried about his health and in their helplessness; they even blamed him that he was suffering because of his own fault of having given importance to duty over self-care.

Dr. Nilesh’s message to medical students is that by taking necessary precautions we can prevent COVID. The first and foremost thing is to not discriminate between COVID-19 patients. His experience highlights the importance of face shields. He was wearing a PPE kit and N95 mask but the eye shield was missing and that exposed him and thus, Dr. Nilesh exclaims that face shield is also of utmost importance especially while intubating patients and when one is physically near them.

As a doctor, one undergoes several life transitioning episodes that can make or break one depending on how one perceives and handles the entire experience. One such episode that affected Dr. Nilesh deeply was the treatment of a 25-year-old TB patient. He was the only child of a single mother. When the patient was brought in he was experiencing breathlessness. Misal persuaded the cardiologist to attend to the patient immediately. However, the patient was short of money to pay the bill. Nevertheless, he took the case forward on humanitarian grounds and started the required treatment. The patient became fine and got discharged after few days. After two months, the patient reported of indigestion and vomiting. The patient himself stopped taking the prescribed medicines without informing Dr. Nilesh. He was then put on intubation once again due to complications. However, this time the team could not save him and the patient died. This was particularly traumatic for the entire team in general and Dr. Nilesh in particular. And the patient’s mother in her despair blamed Dr. Nilesh for the death of her only child. He was not let down as he perceived these negative experiences as lessons that taught him a lot in the beginning of his career itself.

Throughout his career, Dr. Nilesh has learnt that if there is one thing that a doctor should not sideline, it is the need to meticulously manage
paper work. Dr. Prachee highlighted that doctors need to ensure their safety from infections and safeguard their careers as well. This is achieved through transparency between doctors and patients and taking consent wherever required, sharing updates with the concerned, and explaining the patient’s condition on a timely basis. It is critically important to follow such protocols to avoid medico-legal cases that can destroy one’s career and tarnish the credibility of sincere doctors.

There is still hope for humanity when such selfless, service-oriented young doctors dispel their duties despite facing adversities.

What remains to be seen is whether we Deserve such Doctors when we ourselves cherish individualism and self-centered approach to life.

I'm Anne Anish and a person with a vision and performs with the sole purpose of bringing about a change; of uplifting people and helping them realize their inherent skills so that they are equipped with the tools required to improve the quality of their lives! Anne is a knowledgeable individual who has taught relevant skills to people in schools, colleges, universities, hospitals and corporate houses.